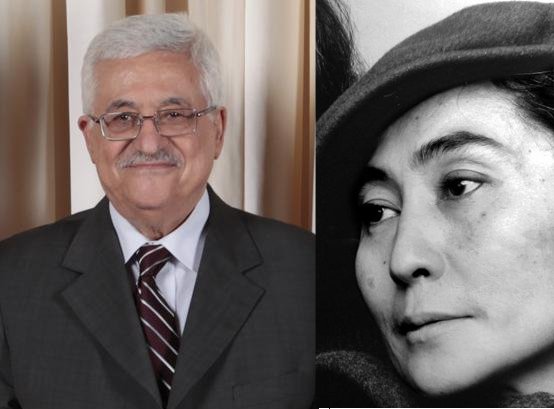 Is Mahmoud Abbas the new Yoko Ono? I ask because it seems very much like he’s trying to break up the Middle East’s very own Fab Four.

In 2002, roughly 18 months after the start of the Second Intifada, the USA, European Union, Russia and the United Nations came together to form the Quartet on the Middle East. It quickly released the “Roadmap to peace”, which was eventually accepted by Israel and the Palestinian Authority as the process that should be followed to reach a peace deal. The Quartet has been the main mediator in the Peace Process since then, the custodian of the bilateral Israeli-Palestinian relationship. In 2007, Tony Blair became the Quartet’s representative, and has generally been praised by the Israeli Government and the PA for the work that he’s done in the region.

But bilateralism isn’t fashionable anymore. For the last 18 months or so, Mahmoud Abbas and the Palestinian Authority have been running a unilateral track to statehood – first trying to get all those States that recognised Palestine in the 1980s (the NAM and ex-Eastern Bloc) to reiterate their recognition, then getting the South American states to add their names, and having an unsuccesful stab in Europe too.

After this, Abbas announced that he would seek full UN member state status for Palestine.

The Quartet generally opposes unilateral steps by any side. It tried to persuade the PA not to go to the UN and instead return to talks with Israel without preconditions. It also put pressure on Israel to meet the PA’s preconditions anyway – specifically, to stop construction in settlements. Following Abbas’ application to the Security Council for recognition and membership for Palestine, the Quartet also published a formula for restarting talks between Israel and the PA.

Israeli PM Benjamin Netanyahu welcomed the formula and broadly accepted the terms – albeit with reservations.

It’s pretty clear now that Abbas prefers the unilateral route, which has won him praise in the Arab world for standing up to the USA and strengthened him domestically.

So, suddenly there have been a series of attacks on the Quartet from the PA. First a couple of weeks ago, PA-run newspaper Al-Hayat Al-Jadidah called Tony Blair a liar, the “godfather of wars on the Arabs, Muslims and weak peoples” and a US lackey.

Then the PA said the terms of the Quartet statement were ‘biased’ in favour of Israel. Abbas spokesman Nabil Abu Rudaineh said that “The Quartet has lost its credibility” and that Tony Blair is a

“servant of the Israeli government” [who is] “no longer welcome in Ramallah. We prefer not to see him here again.”

The PA leaked that they were considering formally asking for Tony Blair to be fired. And today, Fatah Central Committee member Mohammed Ishtayeh said on the radio:

“We do not expect much of the Quartet. There is discontent with its envoy Mr. Tony Blair”

“Our general evaluation of his efforts is that he has become of no use at all. He has developed a large bias in favor of the Israeli side and he has lost a lot of his credibility.”

“We hope the Quartet will reconsider the appointment of this person”

There are tensions in the Quartet between Russia and the USA over issues like Israel’s status as the state of the Jewish people. The Quartet office run by Tony Blair has helped hold the members together, but knifing Blair could destabilise the whole operation.

I think that’s the whole point. The Egyptian revoltion and Turkish realignment have changed the balance of power in the Middle East. Unilateralism is boosting Abbas and hurting Israel and the US, as well as splitting the EU. From the point of view of Mahmoud Abbas and the Palestinian Authority, the Quartet – with its committment to promoting bilateralism and negotiations – is now in the way. Abbas thinks he can smash the Quartet, and he might be right.