The ZX Spectrum is 30 today, making it a few months younger than I am.

Apparently, the Spectrum was the first home computer to break into the mass market in the UK due to its low price-point and decent catalogue of software. But I didn’t know any of that at the time.

I don’t remember when we got our Spectrum, but I vaguely remember that we didn’t have one and then at some point we did. I don’t think it was new when we got it, and it wasn’t our first computer – there was an old Commodore PET in a cupboard that I had never seen. The Spectrum was a tiny thing, with its famous rubber keys and assortment of wires. 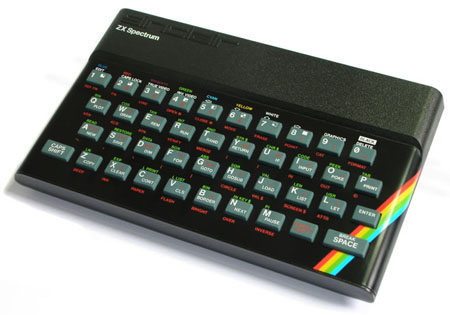 It had to be hooked up to the TV using a special output cable. Software came on audio-tapes but It didn’t have a tape recorder built in – we had to connect one to it using a line-in cable. The joystick (and we used an old Atari 2600 stick at first) had to plug into a special Kempston card that had to be plugged into the machine. If anything was knocked or dirty then it all wouldn’t work.

Loading a game took time – from a minute for a short one to several minutes for a long, new one – and if a tape had more than one game on it you had to fast-forward it first. Then we’d hear the famous loading sounds – the low header pulse while the screen’s border flashed cyan-and-red, followed by the high-pitched screeching data sound while the screen-border went yellow-and-blue. And when it was finally done we could play a game. If we were lucky.   If we were unlucky we’d have to start again.

I remember playing games with my Dad – the old text-based adventures at first, like the Hobbit and the Hitchhikers’ Guide, both famously hard, and the classic Batman game. I remember the excitement when we got Elite, and the frustration when the special Lenslok copy-protection meant we had to look at the screen though a special piece of plastic to play the game – and it didn’t work so we had to get a new one. Eventually I got and played my own games: the Dizzy series, Mercenary, Rainbow Islands, even Tetris with its eerie music (not the Russian music you know from the Gameboy – this music).

We had all these old computer magazines, and some of them had programming tips in them. I started writing BASIC programs young; I even wrote a sort-of-functioning version of a game a bit like Snake. We bought a game that let you make other 3d games for the Spectrum. I played with it for hours but never made a game that worked.

I also bought the classic magazine Your Sinclair, famed for its sense of humour as the Spectrum gradually slid towards obsolescence. The sarcasm, surrealism and self-deprecation I learnt from YS have served me well in life.

At some point we bought a newer Spectrum – with a built-in tape recorder – and we scoured carboot sales, buying up tens of games for a pound as people sold off their old tapes.

Eventually we got a Sega Mega Drive and a SNES and we put away the Spectrum for good. But, 30 years after its release, I realise how much it changed my life. I learnt how to program, how to play co-operatively and how to read technical manuals, and I think back to those Sunday mornings watching my Dad play Elite and remember what a good time it was (of course, these days he still plays more computer games than I do).

I leave you with this video which reminds me of the Good Old Days.

One thought to “Happy Birthday Spectrum”