I’ve been reading the fascinating judgment(pdf) that today resulted in Tower Hamlets Mayor Lutfur Rahman being removed and barred from office and his election being voided.

The judgment is long but well-written and genuinely interesting. It covers a lot of ground specific to Tower Hamlets – internal Labour party splits, vote-tampering and personation, and the use of public funds to bribe Mr Rahman’s supporters.

The ruling also dealt with another element of English law that hasn’t been tested in court for a long time – that of undue spiritual influence in an election.

The Representation of the People Act 1983 s115 says that:

(a) if he, directly or indirectly, by himself or by any other person on his behalf, makes use of or threatens to make use of any force, violence or restraint, or inflicts or threatens to inflict, by himself or by any other person, any temporal or spiritual injury, damage, harm or loss upon or against any person in order to induce or compel that person to vote or refrain from voting, or on account of that person having voted or refrained from voting;

This provision was originally passed to stop Roman Catholic clergy controlling Irish elections in the 19th Century by threatening their congregations with hellfire, but it has been repeately re-enacted and the Rahman ruling finds that it’s still in force.

…there is a line which should not be crossed between the free expression of political views and the use of the power and influence of religious office to convince the faithful that it is their religious duty to vote for or against a particular candidate. It does not matter whether the religious duty is expressed as a positive duty – ‘your allegiance to the faith demands that you vote for X’ – or a negative duty –‘if you vote for Y you will be damned in this world and the next’. The mischief at which s 115 is directed is the misuse of religion for political purposes.

The judgment goes on to fine Lutfur Rahman had broken this law by working with Muslim clerics who urged Muslims to vote for him.

This all sounded a bit familiar, and then I remembered why.

In 2012 George Galloway stood as a candidate in the Bradford West by-election. Bradford West is a majority Muslim seat. In the course of campaigning, Mr Galloway made the following comments to a largely-Muslim audience:

“I believe in the Judgment Day — not all of you do.

I believe that one day we will have to answer to the Almighty for what we did and what we did not do with the life that God gave us.

And I just say this and I ask you to say it, especially to other religious people:

how will you explain, on the Last Day, that you had a chance, on 29 March 2012, to vote either for the guy who led the great campaign against the slaughter of millions of people in Iraq, Afghanistan and elsewhere — you could have voted for him — but instead you voted because of village politics for a party which has killed a million Iraqis?”

According to Andrew Gilligan, at another rally on the same night Mr Galloway said:

“I’m a better Pakistani than he [my opponent] will ever be. God knows who’s a Muslim and who is not. And a man that’s never out of the pub shouldn’t be going around telling people you should vote for him because he’s a Muslim. A Muslim is ready to go to the US Senate, as I did, and to their face call them murderers, liars, thieves and criminals. A Muslim is somebody who’s not afraid of earthly power but who fears only the Judgment Day. I’m ready for that, I’m working for that and it’s the only thing I fear.” 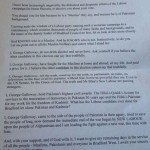 A letter claiming to be from Mr Galloway was delivered to many houses in the constituency in the days running up to the election echoing these themes.

Should the 2012 by-election result in Bradford West have been voided like the Tower Hamlets result? I’m not sure. In the Rahman case it was Muslim clerics doing the spiritual influencing. Here it’s the candidate himself, who is not a Muslim religious authority. But it’s also a much starker and more straightforward spiritual ‘threat’ than the Rahman case.

It’s too late now, of course, with Parliament dissolved and another election underway. But Mr Galloway might have to campaign rather more carefully following the Rahman judgement.

One thought to “Could Galloway’s by-election victory have been voided like Rahman’s?”